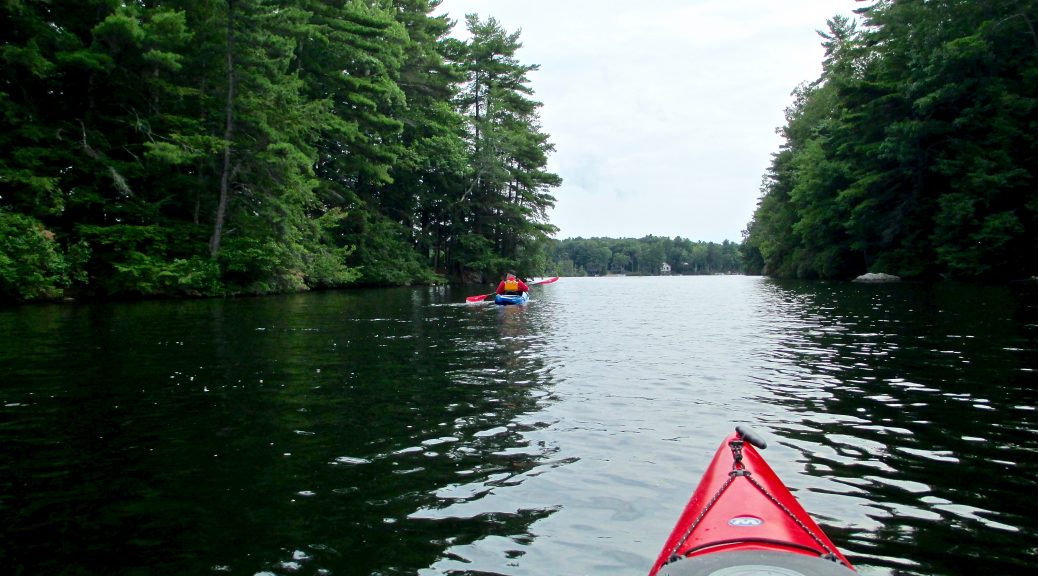 WHY PADDLE HERE? – For a less developed shoreline, fishing, exercise, relaxation or a fall foliage paddle.

The ducks are following me to shore

Heading back to Fundy Cove

Almost back to Fundy Cove

THE PADDLING ROUTE – Considering we have paddled this lake many times and today’s goal was to get a bit of exercise, we opted to paddle all the way to the southern end of the lake instead of just paddling the northern end.  Once launching, we paddled out into Fundy Cove and then followed the shoreline passing Log Cabin Island and continuing south till reaching the main beach area at Pawtuckaway State Park.  After a break, we paddled around Horse Island and then paddled north returning to Fundy Cove.  It’s approximately a 3mi/4.8km paddle from Fundy Cove to the main beach area.

CAUTIONS! – Watch out for rocks at and just below the waterline.  Motor boat traffic can be heavy on summer weekends and holidays.  As with any large body of water don’t paddle here on windy days.  If it’s breezy, you are better off paddling the southern end of the lake, launching instead from Neil’s Cove in Pawtuckaway State Park.

LAUNCH & PARKING – The town of Nottingham, NH maintains a public boat launch with a circular driveway and parking lot at Fundy Cove located at the northern end of Pawtuckaway Lake.  There is a lake host present at the launch to inspect boats and kayaks for invasive plant species.  There is no fee to park or launch.

RESTROOMS – YES. There is an outhouse facility at the boat launch. Additional restroom/changing facilities are located at the opposite end of the lake at the main beach of Pawtuckaway State Park.

WHEN TO VISIT – Avoid holiday weekends if you can.  Late afternoon paddlers experience less boat traffic.  After Labor day, the lake is very quiet and a fall foliage paddle here is pleasant.

Sharing The Joy Of Paddling